This excavation uncovered the most complete plesiosaur specimen found on Svalbard. The skeleton consists of a well preserved pectoral girdle, fore- and hindlimbs and an almost complete neck with surprisingly more than 50 vertebrae. Because the specimens is very complete it will help us identify other, less complete plesiosaurs from the same area. However, no head was found, even after several days of searching for it. 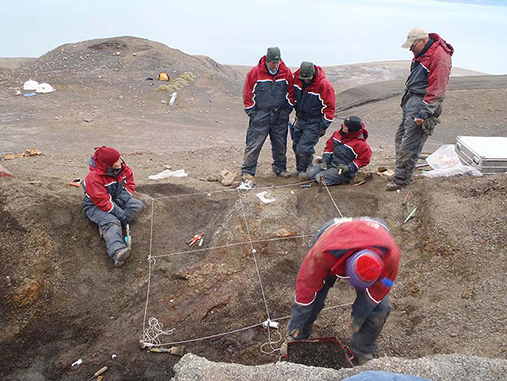 An ichthyosaur found in 2009 and dug out this year, Mascot is an important finding because the specimen contains both a skull, vertebrae from the neck, the back and the tail, as well as fore- and hind limbs. Because so many elements of the animal is preserved, it is easy to compare to other ichthyosaurs, and is clearly different both from the 2009 ichthyosaur and Mikkel, which is described below. 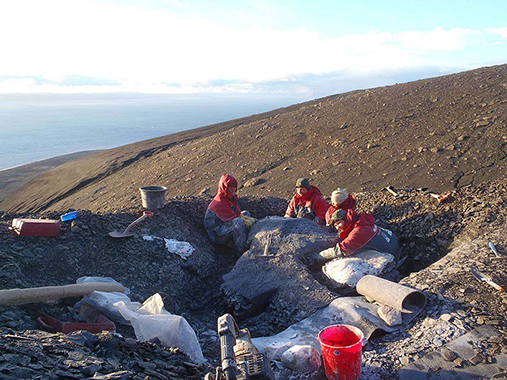 Mikkel is an ichthyosaur and our highest finding stratigraphically. The specimen is almost complete, lacking parts of the skull and tail. The pelvic girdle seems small compared to the size of the animal, estimated in the field to four meters. 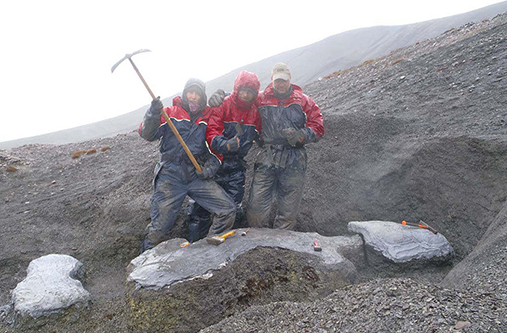 The 2010 expedition also shed light on the geology of the Slottsmøya Formation, especially regarding the carbonate bodies identified as methane seeps on the ocean floor.

This year’s field work also aimed to document and map the sedimentology in the area where the marine reptiles are found. To describe the lithology, a trench through the beds in the slope was made, and a sedimentological log could then be made based on the observations.

This year also carried a surprise regarding fossil occurrences. When digging to make the floor in the kitchen tent a bed full with echinoderms was found. It contains the best preserved specimens ever found on Svalbard. Both sea stars, brittle stars, sea urchins and sea lilies were found.

For the first time ever, a paleontological excavation was transfered directly on the internet. In addition, a National Geographic team joined to record for a TV show, as well as a journalist from the Norwegian science web page forskning.no. Spitsbergen Travel organized daily tours for tourists to the camp and the excavation site.