The expedition in 2015 was a continuation of the mapping and documentation done in 2014, and a follow-up on a series of well-known fossils from Spitsbergen collected 150 years ago. The main aim of the expedition was to excavate early ichthyosaurs from localities mapped in 2014. 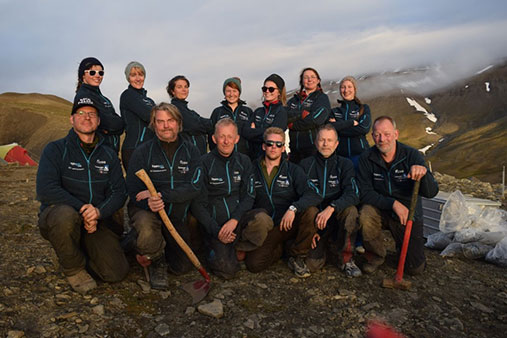 This year’s destination was the Flower valley, named after a former director at the Natural History Museum in London but also the fact that it is far more flower-rich than other parts of the island. The Swede Carl Wiman did an important mapping of the fossils that can be found in the area 100 years ago, and he divided the deposits into four layers. The 2015 expedition collected fossils in the three youngest of these layers, and succeeded in finding what we came for:

«Grippia layer» (approx. 245 million years old)
The Grippia layer locality provided the oldest fossils excavated this year, and turned out to be very rich. We found fossils that might originate from Omphalosaurus, an enigmatic marine reptile with no taxonomical agreement among scientists. In addition we found lots of other marine reptile fossils, and brought 400 kilos of bones back to the Natural History Museum (NHM) in Oslo. 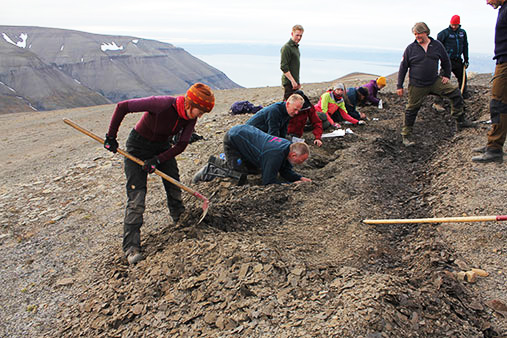 «Lower Saurien layer» (242 million years)
In this layer we found limb bones and vertebrae from ichthyosaurs, as well as shark teeth, fish vertebrae and at the moment unidentified fossils. As we thought the surface material was collected last year, it was a pleasant surprise to find that seemingly never-ending amounts of fossils could be picked. Thus, we could fill many new bags with interesting material. 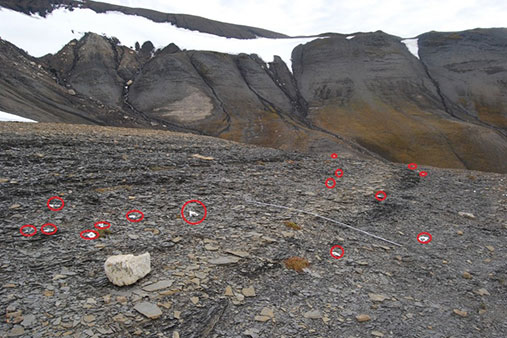 «Upper Saurien layer» (238 million years)
Only 20 meters from the sleeping tents a large ichthyosaur was excavated, probably between three and five meters long. It might belong to the genus Cymbospondylus, and the skeleton was divided into six jackets and plastered before transport to Oslo. 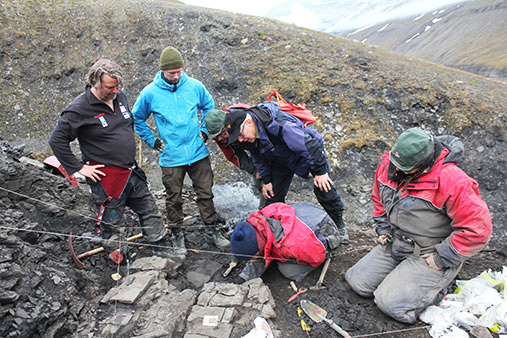 Some hundred meters away other fossil material could be observed in the mountainside. The layer was opened, and under the first shale piece we turned was a tiny, articulated ichthyosaur tail. It seemed to continue into the mountain and we excavated the area, but with no luck: Only two more vertebrae could be found.

In addition, however, we found another ichthyosaur just above this layer. It contains skull, vertebral column and a pelvic girdle – all important parts to place a Triassic ichthyosaur into the correct genus or species. 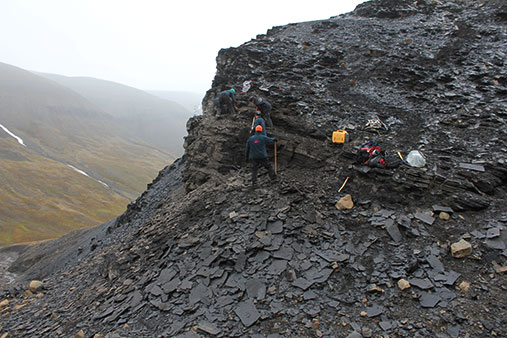 A successful field season
In total, we brought home from Spitsbergen six plaster jackets with a large ichthyosaur,  400 kilos of sediments and fossils from a bone layer, 54 bags of surface material and seven incomplete ichthyosaur skeletons. Five master students will start preparation and description of the fossils during the autumn of 2015.
We also managed to do the scheduled mapping with next year in mind. Two of this year’s bone layers seem very promising, and can be followed around the Marmier Mountain and towards Vikinghøgda Mountan. This area is known to contain deposits of the right age. Our mapping showed that there are several fossil, and there is no doubt that a 2016 field season will be very valuable.

Outreach
The expedition was documented by a blog written from the field by Aubrey Roberts and Victoria E. Nash on National Geographic (English) and forskning.no (Norwegian).