Named after the Konus mountain close by, this specimen turned out to be a very interesting plesiosaur as it contained both a partly skull, the neck, fore- and hindlimbs, the pectoral and the pelvic girdle. For the first time will we be able to compare the front and hind parts of the plesiosaurs we have found in the previous years, and assess the number of different taxa in the collection. A short distance above the skeleton, a broken ichthyosaur skull was discovered, but not excavated this year as we went out of plaster to protect it with. 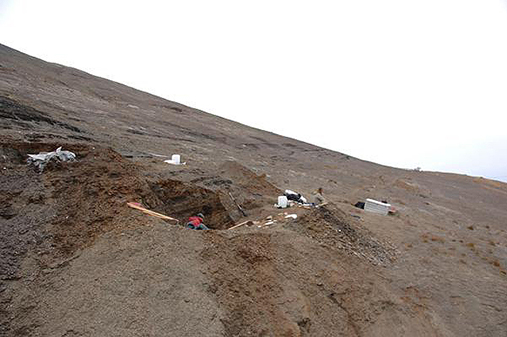 Excavation of the Konus plesiosaur.

Discovered and partly excavated in 2004, this plesiosaur dig was continued in 2009. We had permission to excavate a complete plesiosaur, but the dig hole turned out to contain only eleven vertebrae and nothing more. 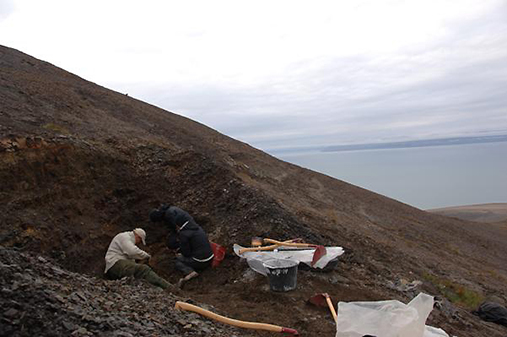 This ichthyosaur was discovered during one of our walks this year, and we applied and got an extra permission to excavate it. It turned out to be our most complete and articulated specimen, only missing the tip of the tail. The dig hole grew large: seven meters long, three meters wide and up to three meters deep. 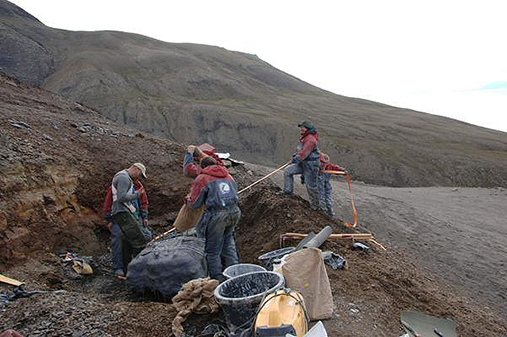 In addition to excavating marine reptiles, the team also ,mapped the ar eon the slope of Janusfjellet for more specimens. It is an extremely interesting area with several new skeletons. Three ichthyosaurs look especially promising and excavation was planned for 2010.

The methane seep group also continued their mapping of the area. Eight new seeps were found, most of them with a diameter of about one meter.

Spitsbergen Travel, ExxonMobil and Fugro supported the field work. Powershop joined for the second time as a sponsor by testing of a wind mill. Helsport gave three tents of the type Svalbard 6 people Høy. National Geographic supported the helocopter lift.