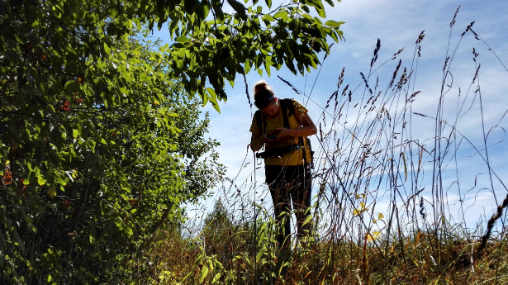 Relative to the importance of cities to people, urban nature is understudied and needs attention. Urbanisation can lead to habitat fragmentation and biodiversity loss, but man-made ecosystems can also house rare species and important biodiversity.

Karlsen mapped twelve 500×500m sites in a gradient from rural to suburban and urban in Oslo using the NiN system. Her results show which ecosystems are common and rare in Oslo's urban setting.

The rural sites contained many different ecosystems. Oslo is surrounded by a forest, and forest types predictably dominated these sites. The suburban sites were dominated by the strongly altered ecosystem types, whilst the urban sited almost exclusively consisted of strongly altered nature where the soil has been turned up, moved, or replaced by artificial substrates.

This master thesis defense was the first in GEco to be held digitally, but Ariane managed the challenge well. Other students surprised her with a delivery of a traditional bottle of cava and a digital celebration after the exam was over.