Changes after 25 years of abandonment in semi-natural hay meadows 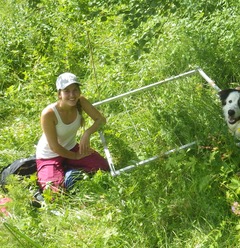 Abandonment of semi-natural areas is widely recognised as a threat to biodiversity in Norway. Research, especially using time series, is important to understand how vegetation is affected by abandonment and how this relates to other ecological factors.

The MSC project was based on a re-analysis of vegetation plots first analysed in 1992. Larsen used ordination techniques and found two main gradients that shape the species composition: the first is a complex nutrient- and moisture gradient, and the second is a successional regrowth gradient.

She also found out that most of the species that were lost after abandonment in the study area prefer dry and sunny growing conditions, indicating that such species are especially vulnerable to regrowth in semi-natural meadows.