Footprints from various dinosaur species are known from several localities at Svalbard. In 1960 and in 2000 tracks from ornithopods were found at Festningen. In addition dinosaur tracks are known from Olsokneset and Kvalvågen. 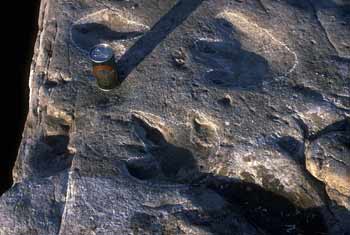 The dinosaur tracks in Kvalvågen were discovered in 1976, but only briefly mentioned in an article. In 2012 more tracks were observed at the same locality, and in 2014 the Spitsbergen Mesozoic Research Group examined and documented them. This is the largest assembly of dinosaur tracks from Svalbard, and was originally thought to belong to a theropod. Closer examination revealed that these too are made by ornithopods.