Ichthyosaurs, which lived between 240 and 90 million years ago, bore a resemblance to modern dolphins, but used an upright tail fin to propel them through the water.  Most ichthyosaurs averaged 4-6 meters in length, but some of the largest reached an astounding 23 meters. 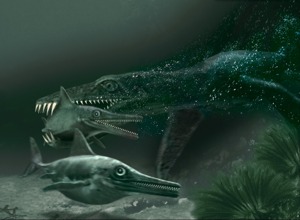 Plesiosaurs, which existed between 210 and 65 million years ago, used two sets of powerful flippers to fly through the water.  Some plesiosaurs possessed a small head suspended at the end of a ridiculously long neck, while members of another plesiosaur group, popularly known as pliosaurs, had short necks but relatively massive skulls.