Plesiosaurs were traditionally divided into two groups based on relative neck and skull length. The long-necked small-headed types were called plesiosaurs and the short-necked large-headed forms were named pliosaurs. The idea was that these two morphotypes had diverged from one common ancestor. However, later studies of plesiosaur relationships have shown that this dichotomy is only superficial. In fact some long-necked forms were shown to be more related to some short-necked forms and vice versa. Certain members of the pliosaur body type did however make up a group of species with a common ancestor (monophyletic group), and was named pliosauroids. The earliest members of this group appeared in the Early Jurassic ( Rhomaleosaurus) . Later, in the Callovian and the Kimmeridgian of the Upper Jurassic even bigger forms evolved like the infamous Liopleurodon and Pliosaurus . These animals were some of the biggest predators ever to roam the worlds' oceans. These two groups could be separated by the cross-sectional shape of their teeth. Liopleurodon had a round shape while Pliosaurus ' teeth had a triangular shape. One can also follow the adaptation to an aquatic lifestyle in Upper Jurassic pliosaurs in their lower limb bones (radius, ulna, fibula, tibia) which gets shorter and wider towards the Cretaceous, and thus makes the flippers more suitable for swimming. All large pliosaurs vanished before the start of the Cretaceous period except for one genus found in Australia and Cuba, namely Kronosaurus. This animal was even bigger than the giants of the Jurassic. This was at least true till the discovery of an enormous pliosaur from the Tithonian (Upper Jurassic) on the arctic archipelago of Svalbard. 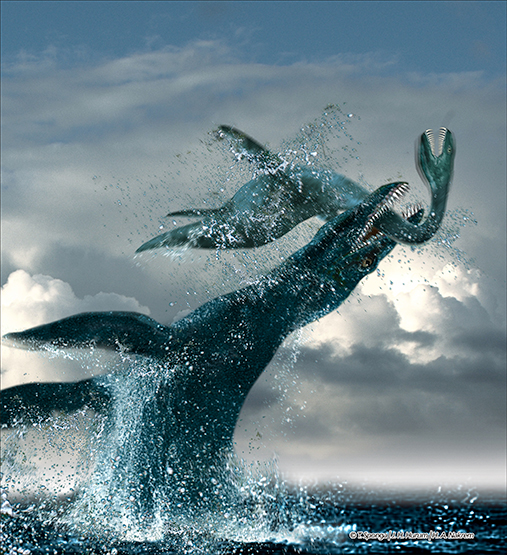