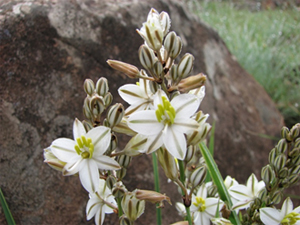 The genera Anthericum and Chlorophytum comprice about 58 species in East Africa. They cover a wide range of habitats from semi-desert in northern Kenya to very moist forest (rain forest) e.g. in the Usambara Mountains of Tanzania, and do well represent the habitat variation among monocotyledonous geophytes in general for the area. Biodiversity hotspots for Anthericum and Chlorophytum may thus serve as a surrogate measure for the monocotyledonous geophytes as a whole. It is interesting to get an indication on how well the diversity of this perhaps not so charismatic, but still important group of plants is protected by the current reserves and national parks.

The measure phylogenetic diversity is based on a chloroplast and ITS phylogenies and was calculated as the sum of lengths for all the branches joining the species occurring in a given gird cell. Bioclimatic diversity is based on each species’ climatic envelope (potential distribution area) where the diversity measure for each grid cell is the number of species having the grid cell within their climatic envelope. Distribution modelling is based on a finer scale than the gird cells used for the other diversity measures and then combined. The various diversity measures will be discussed relative to each other and areas of high diversity are compared to areas of existing national parks and reserves in East Africa.