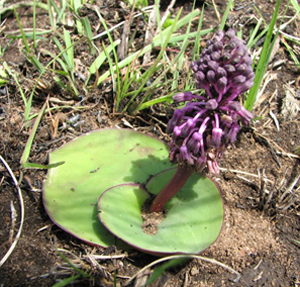 The genera Ledebouria, Drimiopsis and Resnova are mainly distributed in Africa south of the Sahara, with Resnova being restricted to South Africa only. South Africa is also their center of diversity with a secondary center in Eastern Africa. The plants are bulbous with leaves in a basal rosette and tiny flowers in a terminal raceme. The three genera are closely related, and both generic and specific delimitation has frequently been discussed, but no consensus has been reached so far. There is a considerable morphological variation, but preliminary results show little correlation of phylogenies and of distribution of character states and limited general correlation of characters. The aims of this project is to build a robust phylogeny based on DNA sequence data and to discuss this relative to morphological data to

It is also of interest to discuss phytogeograpchical patterns of the genera, particularly Drimiopsis, a genus with an almost disjunct distribution with one center of distribution in East Africa and one in South Africa. Preliminary results show that there are several different chromosome numbers and karyotypes, particularly within Ledebouria. Data on chromosomes may add valuable information to the discussion on specific delimitation of the genus.