Hybridization or extensive morphological variation? A study of Veronica spicata L. and Veronica longifolia L. and their putative hybrid in the Oslo area (MSc project) (completed) 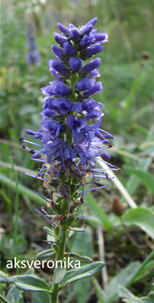 Veronica spicata L. and V. longifolia are two closely related, and morphologically similar species in the family Plantaginaceae. Based on findings of morphological intermediates, the two are assumed to hybridize.

Veronica spicata is distributed in Europe and western Asia. In Norway it has a very restricted distribution in the southeastern part of the country where it is found in open lime-rich shallow-soil lowland systems. This habitat type is declining in Norway and both the habitat type and the species are red listed in Norway. The habitat is regarded as vulnerable (VU) and the species as endangered (EN). V. longifolia is widely distributed in northern parts of Eurasia. In Norway it is distributed in southeastern and northeastern parts, but does also occur as a garden escape elsewhere. It is found mainly in moist meadows and by water’s edges. Neither the habitat nor the species is threatened. V. spicata is threatened by habitat loss, but introgression from V. longifolia may also constitute a threat. It is therefore of interest to find out if the two hybridize, and if they do, to what extent. In this study data from DNA sequencing, morphology, chromosome numbers and pollen fertility will be used to analyse populations of the two species from Eastern Norway and reference populations from Sweden and Southern Europe

Two alternative hypotheses for the occurrence of the putative hybrids can be put up: