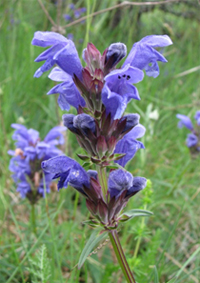 Dracocephalum ruyschiana is seriously declining in Europe. Norway is now one of the countries with the largest number of occurrences of the species, implying that the country should assume responsibility for the species. The species is protected in Norway, is listed in the Bern Convention, and the Red List categories it as Vulnerable (VU) due to the reduction in the size of its populations and of the habitat available to it. The aim of the project is to find out if larger populations are more genetically variable and produce more seeds of higher germinability than small populations.

Data from populations of different sizes from the entire distribution range in Norway are generated and analysed with two Swiss populations as a reference. Genetic diversity is estimated using AFLP markers. Number of nutlets produced per flower is counted and germination is tested under controlled conditions.