The largest avian radiation, the Passeriformes, as a model group for understanding global biological diversification

Guest lecture by professor Jon Fjeldså from the Zoological Museum, University of Copenhagen. A brief seminar on avian phylogenomics will be held immediately after the guest lecture (see below). 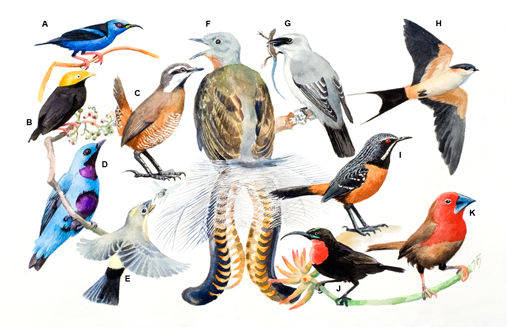 Over the last decade, molecular phylogenetic studies have provided the foundation for a comprehensive analysis of the global diversification of perching birds (Passeriformes), which comprise >60% of all the birds of the world. The group is distributed across all continents, except Antarctica, but surprisingly the phylogeny suggests an origin in the south, most probably in Antarctica. The global expansion of the group can be illustrated by comparing the spatial distribution of species representing basal and terminal parts of root-path groups. The major expansion appears to have started as an island radiation in the area where New Guinea is now located, and it proceeded rapidly across the Old World tropics and up to the Arctic. The talk will review the large-scale pattern, and will illustrate the underlying processes, and the relative roles of long-term re-distribution and intensive speciation in certain montane regions. The best predictor of speciation hotspots appears to be thermal inertia of the nearest ocean, and the talk will also illustrate details of speciation in areas where climate interacts with complex topography in some montane regions.

Seminar presentation: The Natural History Museum of Denmark (University of Copenhagen) has, in collaboration with Beijing Genomics Institute, Smithsonian Institute and others embarked on a project where the aim is to sequence genomes of all 10.000 bird species. This work is already running (with results for all major avian groups already close to completion based on a 320 mill. bp alignment) and evolves rapidly. Jon Fjeldså will tell about the project, its perspectives and possibilities for collaboration.