These are some of the projects I have worked on in the past. The main questions about why females engage in extra-pair copulations and how reproductive isolation evolves at the early stages of speciation continue to intrigue me (see current research project: Early stages of the speciation process). 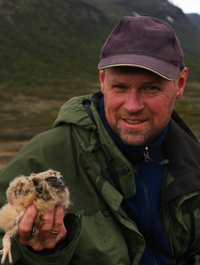 The evolution of female promiscuity

Females of many bird species engage in copulations with several males during a given reproductive bout, despite the fact that sperm from one ejaculate in principle would be sufficient to fertilize the whole clutch. While male participation in mating with multiple females is relatively easy to explain in evolutionary terms (they stand to get more offspring from copulating with more females), female promiscuity represents a Darwinian puzzle since females usually cannot increase the number of offspring through such behaviour. Assuming that there are costs involved in engaging in mating with multiple mates, there should be benefits that more than compensate these costs in order for such behaviour to evolve. The nature of these benefits is the focus of two projects involving two passerine species, the bluethroat (Luscinia svecica) and the blue tit (Parus caeruleus). 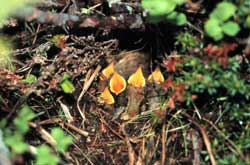 To test whether females gain genetic benefits from engaging in EPCs, we challenged the immune system of bluethroat nestlings by injecting the mitogen phytohaemagglutinin (PHA) into their wings and measuring their swelling response. Comparisons of maternal and paternal halfsiblings demonstrated that offspring resulting from EPC had a higher immune response than offspring sired by the social male (Johnsen et al. 2000). These results represent one of the first demonstrations of a genetic benefit to both sexes of engaging in EPCs. Since extra-pair offspring had higher immune response in both maternal- and paternal halfsibling comparisons, our results indicated that the benefit was caused by a higher genetic compatibility between females and EPC-males, rather than such males having better genes per se. To explore these patterns further, we now focus on how females are able to select compatible mates, using experimental approaches in combination with advanced molecular analyses.

Individual genetic diversity reflects the level of inbreeding and influences fitness in several species. Females would therefore be expected to mate with a genetically dissimilar male in order to avoid the cost of inbreeding. In socially monogamous species, EPC could be a strategy to increase the genetic diversity of offspring, especially when social mate choice is constrained. Using a large data-set of blue tit parentage, we found that extra-pair offspring were more heterozygous at microsatellite loci than their maternal half-siblings (Foerster et al. 2003). This effect was entirely due to EPCs with males that were not close neighbours. We found a genetic structuring of the population, with females being less related to distantly breeding males. Hence, females obtain genetically diverse offspring by copulating with males that breed far away. Female EPCs are likely to have fitness consequences in this blue tit population since individual heterozygosity was related to survival and reproductive success as well as to the expression of a male secondary sexual trait (crown colour). Our results support the idea that females mate multiply to obtain compatible genes for their offspring, thereby avoiding the cost of inbreeding. This work is part of an ongoing collaboration with Dr. Bart Kempenaers (http://www.orn.mpg.de/2622/Department_Kempenaers) and his research group at the Max Planck Institute for Ornithology, Seewiesen, Germany.

Sexual conflict over fertilisations in the bluethroat

Depending on whether or not females play an active role in EPCs, various sexual conflicts involving pair mates and one or more EPC males may arise during the fertile period. In a series of experiments, we have tested whether male phenotypic appearance influences the sexual conflict over fertilizations (Johnsen et al 1997; Johnsen et 1998a; 1998b). For example, in one experiment the complete throat patch was painted black on a group of males, and their behaviour and reproductive success was compared with that of control males that were "painted" with water. Blackened males guarded their mates more intensely and sang less than control males. However, despite the intensified mate guarding, blackened males lost more paternity than controls. These results show that females are able to escape male mate guarding and get EPCs when they are highly motivated to do so. This and other experiments have demonstrated that the outcome of the sexual conflict that arises due to sperm competition is influenced by the phenotypic characteristics of the pair male.

The bluethroat project has mainly been concerned individual, within-population variation in phenotypic traits and/or aspects of reproductive investment. However, the bluethroat exhibits an extensive phenotypic variation also at the between-population level, with several geographically isolated subspecies showing unique plumage patterns in addition to differences in size. Highly differentiated subspecies are increasingly being recognized as representing a valuable level of investigation in the study of speciation and hybridization, complementing studies on closely related species. As an initial stage of a project on bluethroat phylogeography and ornament evolution, we investigated the genetic and phenotypic differentiation among bluethroat subspecies, using (1) microsatellite genotyping (11 loci) of a sample of 364 individuals from 11 contemporary bluethroat populations in Europe and Asia, and (2) spectrometric and morphological measurements of a sample of 131 museum skin specimens, belonging to seven subspecies, from the skin collections at the natural history museums in London, Paris, Oslo and Stockholm. There was a well-differentiated southern group of subspecies with white or no throat spots and a less differentiated northern group of chestnut-spotted populations (Johnsen et al 2006). Phylogenetic analyses indicated that the southern all-blue and white-spotted forms are ancestral to the chestnut-spotted subspecies. Given its high level of subspecies divergence and the geographic isolation of many of its populations, the bluethroat may be at a relatively advanced stage of the speciation process compared to other subspecies complexes. This study suggests a role for assortative mating based on throat spot coloration in the process of subspecies divergence in the bluethroat. Future studies will address the function of this ornament in subspecies discrimination, by examining patterns of mating in hybrid zones and by experimental manipulation of male spot colouration.