This page in English

SMRG are currently working on describing material from the Early-Middle Triassic of Svalbard, and we have many projects available for master students . We are happy to discuss other opportunities, so do not hesitate to contact Aubrey Roberts a.j.roberts@nhm.uio.no or Jørn Hurum j.h.hurum@nhm.uio.no if you have questions or wish to apply for the projects. Projects are noted as being either more biology or geology focused, this is a guideline and not a background requirement. Read more about our Svalbard project(s).

We are an open and welcoming group and we are very happy to adapt projects to individual needs or wants. Some projects require fieldwork, others only lab work. For fieldwork, prior outdoor experience in mountainous terrain or in the Arctic is required due to HSE risks in remote areas.

We are currently offering the following master projects:

Synechondiform sharks have been described from the Early Triassic of Spitsbergen (Bratvold et al., 2018, Norwegian Journal of Geology 98) and likely represent at least one new taxon. This project involves examining the collections for new material of synchondiformes and determine whether these represent a new taxon or if it can be referred to a known genus/species.

The material from the Grippia bone bed includes a vast amount of Osteichthyes material. This project will provide the preliminary research needed to determine the type and number of taxa present in the Grippia bone bed. Statistical approaches will be utilised to examine the structure of the ecosystem.

Multiple mixosaurid ichthyosaur specimens have been collected from the Botneheia Fm. of Svalbard. Methods for acid and physical preparation developed at the NHM (UiO) will be utilised by the candidate to allow for in-depth description of the material. The aim will be to use these specimens to redescribe the Mixosauridae family and identify diagnostic features of the two genera Mixosaurus and Phalarodon. Experience with phylogenetic analyses is recommended, but not required.

Layers of “fish hash” have been discovered overlying bone beds in Spitsbergen. These include a large amount of small bones, teeth and scales from predominantly bony fish and chondrichthyans. The aim of this project is to discuss the sedimentology and depositional environment of the “fish hash” layers,  and to conduct a comparison of the deposition and preservation of the Early and Middle Triassic deposits. This project requires some experience  with sedimentology.

Layers of “fish hash” have been discovered overlying bone beds in Spitsbergen. These include a large amount of small bones, teeth and scales from predominantly bony fish and chondrichyians. The aim of this project is to describe the fauna present in these layers and compare differences and similarities in faunal composition between the Early and Middle Triassic “fish hash” layers.

In the Early Triassic Grippia bone bed, numerous bone elements have been recovered indicating feeding behaviour and/or evidence of healing from injuries. The aim of this project is to describe the material and discuss the causes and implications this may have on the palaeobiology and palaeoecology of the ecosystem. Micro-CT scanning will be used for this project. The student will be expected to acquire the necessary skill set for working with computed tomography data.

The student will describe the sedimentology of the Early Triassic to further our understanding of the palaeoenvironment. . The project includes fieldwork to collect and analyse sediment samples from our field areas in west Spitsbergen and correlate these using isotope analysis to known and published results in the Boreal Sea as well as globally.

We also have several specimens of Late Jurassic marine reptiles from Svalbard that could be used for descriptive and taxonomy-based master projects (Ichthyosaurs and Plesiosaurs). Many of these specimens will require a large amount of preparation work, feel free to contact Aubrey or Jørn if this is of interest.

Marine sediments of the Holocene (last 10,000 years) in the Oslofjord area are now widely exposed on land because of relative drop in sea level. These clays and sands are rich in well-preserved fossils of bivalves, gastropods and other invertebrates, recording dramatic changes in climate, sea level and ecology through time. These faunas have not been extensively studied for more than a hundred years (Brøgger 1901). Since then, our understanding of Holocene climate and ecology has increased enormously, and methods have vastly improved regarding e.g. radiocarbon dating, geochemistry for climate reconstruction, and ecological and stratigraphic data analysis.

We believe that the Holocene marine faunas in the Oslofjord area can provide a fruitful field of research into the ecology of environmental change. Since the taxa are the same as in our time, the Holocene data can be used as good analogues for modern processes, and possibly inform predictions about marine faunal responses to anthropogenic warming, sea level rise and faunal invasion such as that of the Pacific oyster.

We need several MSc students (biology or geology) to carry out a pilot study, giving you a unique opportunity to open up a new area of research. Old localities must be rediscovered, so some treasure hunting will be required! Projects include:

1. The Preboreal invertebrate faunas of the Oslofjord area

This project will focus on the first invertebrates to colonize the area after the ice cap receded, especially the bivalves, crustaceans and foraminifera near the so-called “marine limit”, i.e. the locally highest sea-level during deglaciation. What can the taxonomic composition of the faunas (often with Mytilus and barnacles), size distributions, sediment properties and geochemistry tell us about the early Holocene succession during rapid climatic warming and sea-level drop? The material will come from field work at localities around Oslo as well as from museum collections. The data will be used for ecological data analysis, especially ordinations and diversity analysis, and some biogeographical analysis and plotting (GIS).

2. The late Atlantic shallow-water oyster banks of the Oslofjord area

Throughout the Oslofjord area, mollusc faunas rich in oysters (“oyster banks”) are found ca. 10-40 meters above present sea level. Preliminary radiocarbon dating indicates that at least some of these are from late Atlantic time (ca. 4,000 BC), i.e. during the warm “climatic optimum” of the Holocene. The project will focus on the ecology of these oyster banks, with field and laboratory work. Possible localities include low-lying areas around Oslo (e.g. Slemmestad and Malmøya), and Hvaler ca. 100 km south of Oslo. Associated fossils will also be collected and identified for ecological data analysis. Are these oyster banks all of similar age, recording an event of regional significance? Do they represent a faunal invasion? We would also like to look at age distributions, shape variation etc. Encrusting and infestation (polychaete tubes and burrows, sponge borings, etc.) will be studied with microfocus CT.

3. Seawater paleotemperatures of the Holocene in the Oslofjord area

The student will attempt to estimate seawater temperatures using classical geochemical and paleoecological techniques applied to the fossil faunas. This will include oxygen isotope analysis (clumped isotopes may be attempted, depending on funding), Mg/Ca and Sr/Ca ratios, and comparing fossil assemblages with present-day faunas. We may also attempt reconstruction of paleosalinity using e.g. Ba/Ca ratios. 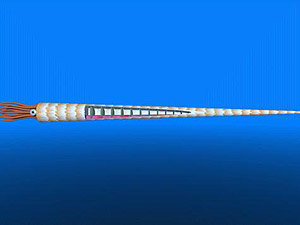 Project 1: Island on a shell: How many inhabitants can you fit?

Competition for physical space shapes the structure of sessile benthic communities and affects recruitment, survival and reproduction of the organisms involved. How many encrusting organisms can fit on an “island” (which is also an organism, a shell in the case of this project) before it is considered “too crowded”? Which traits make an encrusting species an efficient colonizer more tolerant to crowding? Do the “island” type (species of shells) and size affect the number and diversity of its inhabitants? Are there any regions of the “island” more attractive than others for the colonizers? 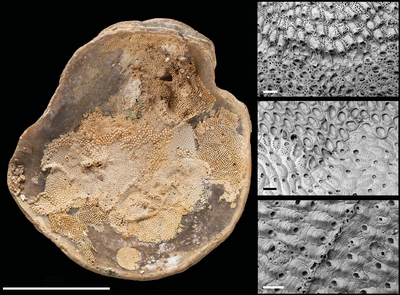 In this project, the student will work with a team of researchers that are linking community ecology, paleontology and molecular phylogenetics to understand general ecological and evolutionary principles, using a unique group of organisms, Bryozoa, as model system. Bryozoans are a fascinating phylum of colonial marine invertebrates with an excellent fossil record but also well-represented in the oceans today.

This project will involve data collection from both fossil and contemporary specimens (all from New Zealand), a minimum amount of species identification (bryozoans and bivalves), and a substantial amount of statistical modelling. If you have taken courses in statistics and R programming, like to ask and answer interesting ecological and evolutionary questions using both living and fossil organisms, and would like to experience work in a fossil lab/natural history museum/be exposed to diverse “natural history” research (including molecular phylogenetics, statistical modelling, life history evolution, marine biology), our group/this project is for you!

Check out some papers from our team here:

Some genera are very species-rich without being very variable in morphology while others are very species-poor yet morphologically diverse. In this project, we want to investigate a evolutionarily very successful genus that has survived for at least 90 million years. It not only survived the K-Pg extinction that killed the dinosaurs, but is also still extant today. Did the morphology of Cellaria, our model organism, evolve substantially to cope with the stress of the K-Pg extinction? How much does species richness explain the amount of morphospace (multidimensiontal trait space) occupied by Cellaria, through geological time? 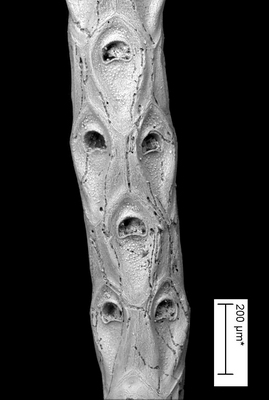 In this project, the student will work with a team of researchers that are linking paleontology and molecular phylogenies to understand general evolutionary principles, while using a unique group of organisms, Bryozoa, as model system. Bryozoans are a fascinating phylum of colonial marine invertebrates with an excellent fossil record but also well-represented in the oceans today.

This project will specifically focus on the bryozoan genus Cellaria with 135 species described to date. The student will compile mostly data from the paleontological and zoological literature but also collect some data from physical specimens, using a desktop scanning electron microscope in our lab. There will be substantial amount of data analyses and interpretation.

If you have taken courses in statistics and R programming, like to ask and answer interesting ecological and evolutionary questions using both living and fossil organisms, and would like to experience what it is like to work in a fossil lab/natural history museum/be exposed to diverse “natural history” research (including molecular phylogenetics, statistical modelling, life history evolution), our group/this project is for you!

Check out some papers from our team here: