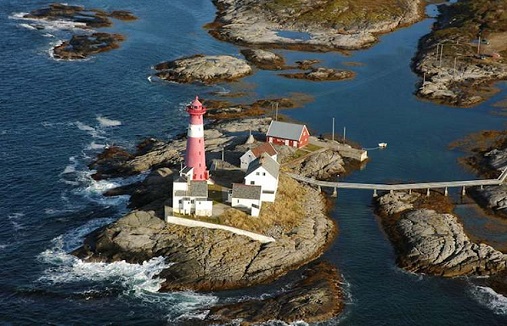 During the field trip famous pegmatite localities of the Proterozoic Tysfjord pegmatite field between the towns Bodø and Narvik in Arctic Norway will be visited. The area is one of the most scenic landscapes in Norway.

A guided tour at the processing plant of the Quartz Corp at Drag is planned. Quartz Corp is the second largest producer high-purity quartz in the world and the quartz raw material is partially mined from the local pegmatites.

Excursion accommodation will be the Tranøy Light Tower on Hamarøy. The excursion is limited to 30 participants.

The hike to the Tennvatn pegmatite requires proper hiking equipment (hiking boots, small backpack, rainwear) and a good condition. The weather conditions can be very rough in the area even in summer times.

Flight tickets from Oslo Gardermoen to Bodø (9 June) and from Bodø to Kristiansand (13 June) will be organized be the committee and are included in the excursion fee.

The first part of the excursion will lead to the southern Setesdal c. 50 km north of Kristiansand where the Proterozoic Evje-Iveland rare metal pegmatite field is located. There the localities Solås, Landsverk 1, Hovåsen, Topazbrudd, and Li gruve will be visited.

The excursion will stopover at the mineral collection of the Iveland municipality, the Iveland wall (a scenic road cut showing partial melting of amphibolites and the formation of pegmatites) and the Beryllen Mineral Shop, the only dealer in the area selling local minerals.

During the second part of the excursion Permian syenite pegmatites exposed in active Larvikite mines of the Langesundfjord area near Larvik will be visited. The pegmatites are famous for their exotic and diverse mineralogy which was already studied by Waldemar Brøgger in 1890.

At June 19 2017 the excursion participants have the choice to be delivered in the city center of Oslo or at the Oslo airport Gardermoen.