The zoological and geological exhibitions are temporarily closed for visitors.

The reception of Ida

The launching of Ida was meticulously planned. The scientific article, the book, the movie and Ida herself were all presented during a well-attended press conference at The American Museum of Natural History in New York. The story of the fossil went all over the world. That the launch had been a success became evident on the following day, when Google had incorporated Ida into its logo.

The plan for this launch was laid a year or so in advance, scrawled on a paper napkin at an Oslo pizza joint by Jørn Hurum and Anthony Geffen, head of the production company Atlantic Productions. To Hurum, this working method was not anything new. For several successive years, good planning had yielded excellent media coverage for the excavations of giant Pliosaurus on Svalbard, and that experience led to the first contact with Atlantic. This cooperative venture resulted in the documentary Predator X, which premiered on History Channel on the 30th of March 2009.

Atlantic was therefore a natural choice as producer of this movie as well. Well-known popular science writer Colin Tudge was engaged to write the book, together with Josh Young. 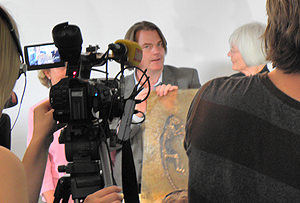 Jørn Hurum unveils the fossil to eager photographers on the press conference at The Natural History Museum in Oslo, together with Minister of Research and Higher Education, Tora Aasland.

Up until then, only scientists, some journalists and a select few others had seen the fossil. On Friday June 5th, The Natural History Museum could at last show her to the public, as part of the exhibition "Can We Forgive Darwin?". Throughout the whole process, Hurum had been adamant that she must be exhibited to the public in Norway first, since, as he pointed out, ”it was the Norwegian people’s taxes who paid for this".

And the Norwegian people leapt at the opportunity. On the first weekend of the exhibition, it received 1000 visitors on the Saturday and 2000 on the Sunday – touching the maximum number allowed by the museum’s fire regulations. The museum guards had to use hand-held click counters to register the number of visitors coming and going, ensuring that it did not exceed legal capacity.