Got response 404 from server
UiO Natural History Museum
Main navigation
Back to uio.no
Sub navigation Menu
About the museum > News > Archive > 2017 > Seeds of peace from Hiroshima to Oslo
Norwegian version of this page 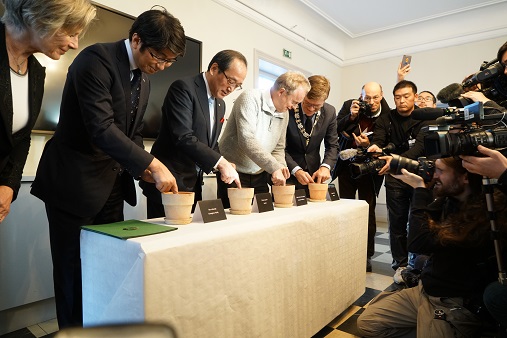 The donated seeds come from trees which survived the nuclear bomb explosion in Hiroshima on Aug. 6th, 1945. Trees thought to have been killed in the blast brought forth new green shoots already the following spring. This gave immense hope to the survivors. The aim of the organization Green Legacy Hiroshima is to distribute seeds from the survivor trees as symbols of peace and memorials to botanical gardens and institutions all over the world.

The Natural History Museum will receive seeds from four different species which have the hardiness required to grow outdoors in Norway. The seeds will be sown and cultivated in the Botanical Garden, and in time the trees will be planted in public areas in Oslo.

A Japanese delegation, consisting of the mayors of Nagasaki and Hiroshima and a group of survivors, visited NHM on Dec. 9th. During the ceremony, the seeds were presented and sown. Rector Svein Stølen at the University of Oslo, and director at the Natural History Museum, Tone Lindheim, hosted the seremony. Council leader Raymond Johansen accepted the seeds on behalf of the municipality of Oslo.

The four species that were sown is: